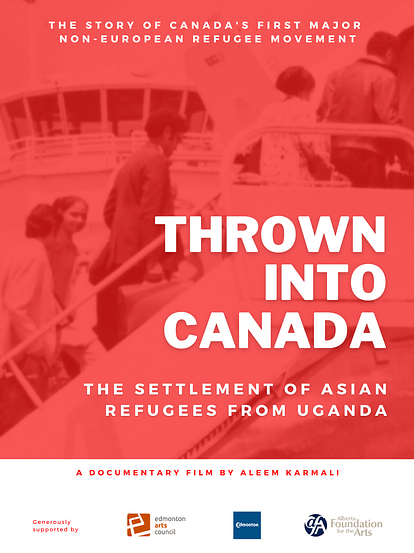 In 1972, the President of Uganda, Idi Amin, announced that all Asians had 90 days to leave the country. Among other countries, Canada offered an “honourable place” to almost 8,000 Ugandan Asian refugees.

This documentary film explores Canada’s first major migration of predominantly Muslim, non-European, and non-white refugees, set against the backdrop of African post-colonialism, a brutal military dictatorship, and changing Canadian attitudes to diversity. Their story of struggle and hope became part of Canada’s conversations about refugees and cultural pluralism, and informed the Canadian response to future refugee movements.

Written and directed by Aleem Karmali, the film features interviews with historians, Canadian immigration officials, and those who lived through the expulsion, including:

Supported by generous funding from the Edmonton Arts Council and the Alberta Foundation for the Arts.

THE SETTLEMENT OF ASIAN REFUGEES FROM UGANDA